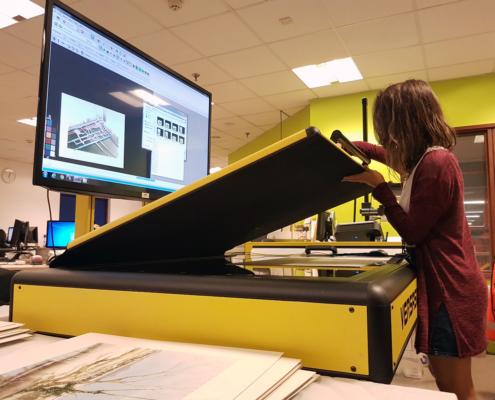 The London Transport Museum (LTM) has extensive and extremely wide-ranging collections about the London transport network through the ages. It operates from a main site in Covent Garden and its depot in Acton.

The collections range from tiny items such as buttons, tickets, cutlery and badges all the way to vehicles, buses, trams, control boxes and underground trains. LTM also has a significant collection of large flat items such as posters, artworks, maps and moquette (the distinctive woven upholstery fabric with individual patterns for different London transport bus and tram routes and underground lines).

The museum has been systematically digitising collection objects under project funding for some time. They use a collections management system to store digitised items and present these to its audiences online via the LTM website.

Anna approached Geoff to discuss a particular project that she was planning for at the museum where there was a need to digitise a large quantity of posters for the ‘Poster Girls: A Century of Art and Design’ exhibition. There was also a quantity of other large flat items that needed to be digitised for other projects and to be used to create products that would feature in the LTM Museum shop.

Anna had been considereding two main technology options. The first was to hire a large format A0 flatbed scanner called the SMA Versascan from Genus. The second was to photograph the items. In either case the plan was to do the digitisation at the Acton Depot with the support of 2 interns that were working for the museum for a fixed period of time.

Geoff was able to see the items scheduled for digitisation when he visited the depot, and he was able to provide advice on the options to digitise based on the location and space, as well as explore some of the broader systems-based challenges LTM was experiencing.

It became clear that the most appropriate method for digitising the collections was for the museum to hire the A0 Versascan from Genus. The reasons for this were:

The Museum decided to opt for the SDE recommended approach. The only issue remaining was how to ensure colour accuracy of the scans for onwards representation and use in published media etc.

SDE offered to calibrate the scanner after it had been installed and measure its colour accuracy scientifically. SDE also recommended the inclusion of a calibrated colour chart in each scan to ensure that the colour was correctly balanced. The result would be that the scanned images would have a colour managed ICC profile embedded within each image file. This ICC Profile could, in turn, be used by publishers or product manufacturers to convert the images to the specific settings that each output mechanism needed.

SDE was commissioned to carry out that calibration and training for the museum. To do the work SDE commissioned Andrew Bruce (contracted through the Postal Museum where he was the lead photographer). Andrew is an established expert in digital colour management, and he was the ideal support for the project.

Geoff delivered training in a methodology for doing the digitisation efficiently to enable the team to make best use of the equipment which they only had access to for 2 months.

The project as designed by Anna Creedon and then implemented with the support of SDE was a huge success. At the end of the 2-month scanning period significantly higher numbers of items had been digitised than was originally envisaged. All images created were colour accurate and quality checked and they were ingested into the Museum’s Image Management System. The colour accuracy of the images meant that they could go on to be included in the printed book accompanying the exhibition:

Images captured have also gone on to be made into LTM Museum Shop products and poster facsimiles.

The images captured have been used extensively in the museum and remain available online on the Museum Website.

Anna Creedon attended a conference where Geoff Laycock from SDE was speaking about planning digitisation projects and image capture approaches. After his talk Anna approached him to discuss her project and the challenges that she was facing.

Geoff offered to visit the museum Depot for a free half day consultation to assess the project and provide the advice Anna needed.

These cookies collect information that is used either in aggregate form to help us understand how our website is being used or how effective our marketing campaigns are, or to help us customize our website and application for you in order to enhance your experience.

If you do not want that we track your visit to our site you can disable tracking in your browser here:

The following cookies are also needed - You can choose if you want to allow them: