WHL realised that digitisation needed to be part of their everyday processes. A new project presented an opportunity to work in a more integrated way 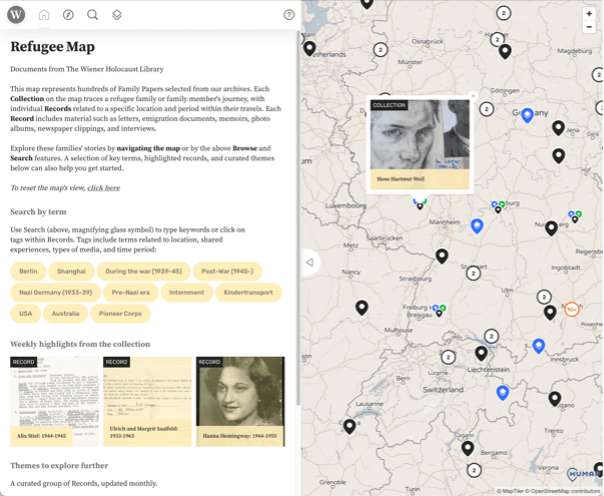 The Wiener Holocaust Library is one of the world’s leading and most extensive archives on the Holocaust, the Nazi era and genocide. The Library’s unique collection of over one million items includes published and unpublished works, press cuttings, photographs and eyewitness testimony.

The Library has its origins in the work of Dr Alfred Wiener, who campaigned against Nazism during the 1920s and 30s and gathered evidence about antisemitism and the persecution of Jews in Germany.

Dr Wiener and his family fled Germany in 1933 and settled in Amsterdam. Later that year he set up the Jewish Central Information Office (JCIO) at the request of the Board of Deputies of British Jews and the Anglo-Jewish Association. This archive collected information about the Nazis, which formed the basis of campaigns to undermine their activities.

Following the November Pogrom of 1938, Wiener prepared to bring his collection to the UK. It arrived the following summer and is believed to have opened on the day the Nazis invaded Poland.

Throughout the War the JCIO served the British Government as it fought the Nazi regime. Increasingly the collection was referred to as ‘Dr Wiener’s Library’ and eventually this led to its renaming.

At the beginning of the consultancy SDE worked closely with the library team to understand a define their challenges, their desired future direction and the projects that were planned for delivery. This resulted in a Digital survey with a list of recommendations.

It was clear that the library had a high awareness of the importance of digital practices in relation to its core mission. Increasingly over time most access to the collections would be digital as opposed to in person. In order for the library to fulfil its mission to educate and inform users about the Holocaust and Genocide, digital representation of materials needed to become the main priority.

From the study undertaken was clear that the organisation’s digital practices were formulated incrementally in response to need. Because of the lack of funding for this area historically the amount of digitisation that had been carried out was impressive, as were the in-house processes that were designed. There was an opportunity however to look at digital practices on an organisation wide and coordinated level.  When funding had been secured in the past, digital projects were delivered in isolation from other digital activity at the library resulting in some excellent bodies of digital material that exist in project specific websites and not in a centralised repository. This isolation, created for practical reasons, means that the project content could not be searched and viewed in the context of the overall collection.

The key recommendations of the survey included:

The use of Goobi and the in-house digitisation studio has meant that several projects could be delivered in recent years, all generating content that can be searched centrally on the WHL collections viewer in parallel to being viewer through the project specific sites.

SDE continues to work with the library to move their digital representation online to an even more enhanced level with a discovery layer enabling fluid searching and browsing of the collections.

SDE continues to work with the library to move their digital representation online to an even more enhanced level with a discovery layer enabling fluid searching and browsing of the collections.

Most recently SDE came up with a plan to support the Refugee Map project, launched in 2021, where the stories of refugees are represented on a map and users can access documents about the refugees and their experiences live through clicking map layers. The project was developed working with Humap (https://humap.me) and the library wanted a method for linking the content in their collections with the map interface without having to upload images and metadata to another system.

As the library did not want to create another digital island project, SDE was asked to help solve that problem. The solution was to use the WHL Collections viewer as the source repository for the project. The collections viewer is powered by the Goobi viewer, and that system utilises an International Image Interoperability Framework (IIIF) image viewer allowing for the sharing of images and metadata on that open platform. The collection items uploaded were automatically assigned a IIIF manifest that could be used by any open source IIIF viewer online. Humap duly integrated a IIIF viewer into their platform and the library team inputted the IIF manifest information into that system. In this way the archival documents were live linked to the map pins and served directly from the WHL collections viewer using the IIIF protocol.

Once the library had decided to go down the path of digital transformation, they started searching for consultancy support and advice from the wider educational community. One of the people that came in to talk about their challenges was Professor Marilyn Deegan from King’s College London.

Professor Deegan visited the library and suggested that they contact Geoff Laycock from SDE as he would have the right balance of skills to design an approach for the library’s vision. Professor Deegan had just finished working with Geoff on a large-scale digitisation project in Rwanda and had seen first-hand how Geoff was able to problem solve and design practical solutions to digital challenges in that setting.